'The payoff of his career' 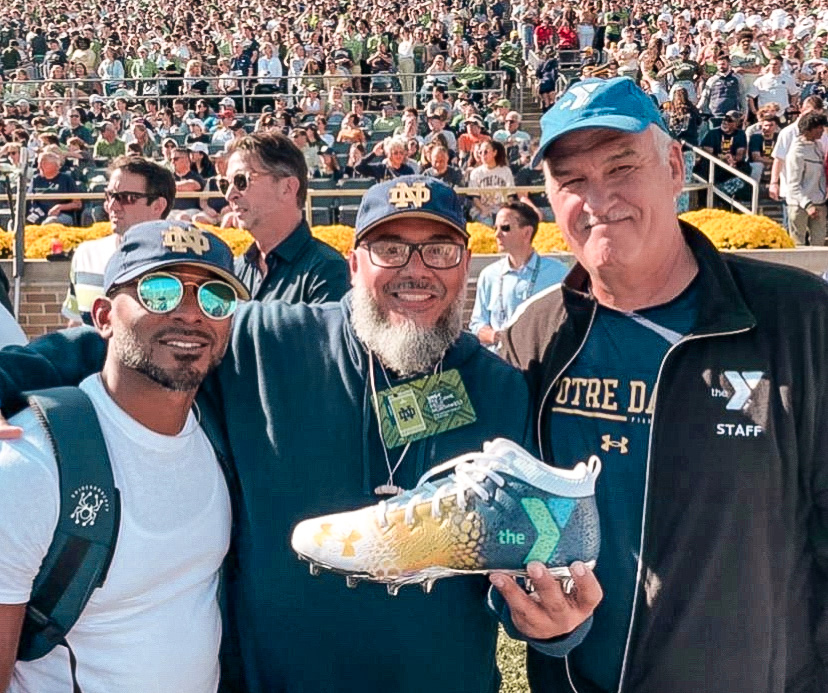 When Dez Zambrano was told he was going to be designing custom cleats for Notre Dame Football, he was onboard immediately.

“I’ve watched “Rudy” several times a year since that movie came out. Back when there were only a few games on TV every Saturday, Notre Dame was one of those games and I was watching,” he said. “I am a fan.”

But when it was announced the cleats would be for the Cleats for a Cause Initiative, with proceeds from their auction going to support four South Bend organizations, including the YMCA of Greater Michiana, Dez couldn’t control his excitement.

“It was the perfect storm as an artist, as a Notre Dame fan, and as someone who learned how to swim at the YMCA,” he said.

Dez grew up in Arlington County, right outside of Washington D.C., with a brother and a single mom.

“My mom worked days and nights, with a small break in between to get me where I needed to go. The YMCA was where I spent my summers. It was where I learned to swim. It was after school care for me. The YMCA was a safe place,” he said.

At the Y, he learned teamwork, comradery, communication skills, and responsibility.

“It helped me to be able to have my own business, but before that, navigate the world and be sociable and know what it’s like to be part of a team,” he said. “The impact is longstanding, and a youth well spent not getting into trouble.”

Dez started DEZ Customz about 10 years ago with partner, Mohammad. They quickly formed a relationship with Under Armour. Both businesses are based in Maryland and were excited about designing custom shoes.

Dez said when Under Armour came to them about designing the cleats for Notre Dame, it was all-hands-on-deck.

“It was three people, six weeks, and 132 pairs of cleats. It would not have been accomplished without teamwork. I get to have these opportunities to talk, but my partner Moe, and Fernando, worked just as hard,” Dez said.

The shoes arrived completely white and were transformed into what the athletes wore at the October 22 game. It involved hours of basting, airbrushing, and stenciling.

“There were moments where it got a little iffy and we weren’t sure we were going to pull it off,” Dez said. “But we were able to be creative and get it done.”

On the day of the game, the artists were invited to attend and be on the sidelines with the leaders of the four nonprofit organizations. He said it was at the very last minute they were introduced, and the gratitude shown to them was heartwarming.

“I was so excited to be there, they could have put us in the nosebleeds, and I would have been happy. To find ourselves on the sidelines and to meet the heads of the organizations for who we did the work for… The whole day was just one of those that I will remember forever,” Dez said.

He said becoming an artist isn’t an easy task, so you have to appreciate the wins. But this win could have been the payoff to this entire career.

“I’m glad we were able to do some good,” Dez said. “As an artist at the end of the day, you hope your art can start a conversation, change a conversation, or lead to some good. And in this case, it did. I’m so glad the proceeds went to these organizations. I hope the YMCA can be there for many kids the way it was for me.”

The YMCA of Greater Michiana is a nonprofit organization whose mission is to put Christian principles into practice through programs that build healthy spirit, mind, and body for all.